Scrievin Sangs! Ceilidhmakers Christine Kydd and Ewan McVicar have delivered, over a number of years, projects on Scotlands traditional arts in Europe and further afield. In 2020 Ceilidhmakers projects see new members on the team, working with all ages on a range of themes for songmaking. 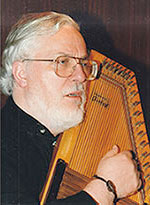 In the 1990s, Ewan pioneered Songmaker in Scotland for Scottish Arts Council. He created the much-praised Scotland''s Songs website for Education Scotland (2010). The Hamish Henderson Award for Services to Traditional Music came in 2015 - the highest accolade in the Scots Trad world. Ewan continues to work on our research and websites as well as in the classroom when possible.
www.ewanmcvicar-com.webs.com
Hands up for Trad - Ewan McVicar 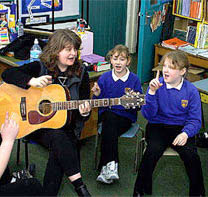 Christine trained with New Makars Trust in the mid nineties in their methods, developing the model to include other traditional art forms and instrument demonstrations where appropriate. Christine entered the Scottish Traditional Music Hall of Fame in 2018. www.christinekydd.com

Andy Shanks joined the team in 2018, a singer songwriter and musician as well as an expert on Scots literature and Language, appearing in the BBC documentary The Promised Land championing MacDiarmids A Drunk Man Looks at a Thistle and its place in Scotlands cultural revolution. His songs have been covered by top singers including English icon, June Tabor. www.andyshanks.co.uk

In the late 1990s, we were delighted to be invited to Belgium and Spain to represent the country, and talk about our approach,  making connections with organisations LeoSings and Koor&Stem.  Now, Ewan, Andy and Christine continue to develop the approach with greater emphasis on Scots, Doric, working with a range of freelancers including a research and field ecologist, songmaking in Scots, exploring the outdoor environment for inspiration and working from Nursery age upwards. We offer shadowing and mentoring where appropriate.

Each school project had a dedicated website with recordings, songwords, illustrations, research. These have now been merged into other sites:

We use the www.scotssangsfurschools.com site and offer www.ceilidhtreasurehunts.com as one of the tools for exploring it. Caterans Commonwealth workshops - Storybox. Children wrote songs of the future in Alyth! commonculture.org.uk/events-2/

With Tay Landscape Partnership we created "Telling Our Stories",  working in various ways with communities including in schools, care settings, and with folks from many projects including Abernethy Museum and Piece Partners from Perth.

The website gives an overview of the project. www.ceilidhmakerstaylp.com Tay Landscape Partnership-  Films here show the ceildhmakers contribution including the main school project.http://www.taylp.org/wordpress/ceilidhmakers/

"It''s been a pleasure to see Ceilidhmakers in action, such a privilege to see the children engaging with music and song and to see how they positively blossom, even within the space of an hour"...Susan Whyte, Youth Music Initiative Coordinator, Education & Children''s Services, Aberdeenshire Council

Ceilidhmakers
Contact us to discuss your project
Send us an email and we will get back to you as soon as possible
scotsvoice@christinekydd.com